For miles and miles, all Rahill sees is a vast swath of sawgrass. The straw-colored, waist-high blades envelop him in a sea of nature’s beauty. The air is warm, thick with humidity. The sound of chirping birds fills the air.

By day, Rahill works in information technology for a major airline. But his true passion lies nestled deep within the swamp, hunting Burmese pythons in the Everglades.

Since he began hunting pythons in 2008, Rahill has caught more than 400 snakes. Only three have slipped out of his grip.

His longtime passion for the hunt has netted him a spot on the South Florida Water Management District’s python hunting roster this year. Thousands applied but only 25 hunters earned a coveted spot on the official team.

The group’s goal is simple: kill as many pythons as possible before June 1.

Rahill, known as the “python whisperer,” heads up the Swamp Apes, a group of hunters composed of newly-returned military veterans from Afghanistan and Iraq. They're still suffering from residual war trauma and many are victims of post-traumatic stress disorder.

They're home, on friendly soil, but with a sense of mission unaccomplished, they're doing a job few are prepared to do -- hunting down pythons in Everglades National Park.

The idea for the python hunting squad was borne from a serious concern for the Everglades ecosystem. Pythons, an invasive species, have reached a population estimated at more than 150,000 in the Glades.

One of the ecosystem’s biggest predators, Florida Fish and Wildlife Commission experts say the snakes threaten the area’s precious wildlife, consuming everything in sight and wreaking havoc on the region, one bite at a time.

To make a dent in the python population, the South Florida Water Management District has thrown $200,000 into the pilot program to pay hunters to eradicate the snakes from the Everglades.

Hunters like Rahill aren’t tempted by a fat paycheck, though -- because there isn’t one.

Instead of a chance to make money, Rahill sees each python hunt as an opportunity to find peace among nature in the largest wilderness east of the Mississippi River. 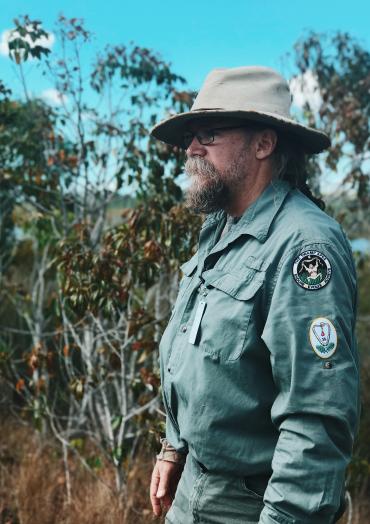 Rahill and the Swamp Apes frequently travel to the Everglades for their own version of therapy. Each hunt is a guiding light on the path back to normalcy for veterans who have seen both war and bloodshed.

The Swamp Apes’ military training, Rahill said, makes them more vigilant hunters than the average Joe. Because they are specially trained, they are able to focus in incredibly dire situations, similar to the harsh conditions of the Everglades, where the temperature frequently climbs to 90 degrees or higher.

Watching the military veterans concentrate on the hunt, Rahill said, helps them take their minds off their other stressors. Many vets have confessed the search for pythons has helped them overcome their traumas when nothing else would help.

“I get emotional just thinking about it,” Rahill said, tears filling his eyes.

Rahill has a special relationship with the pythons. They turn him into a bucket of emotions. He names each one. He sings to them. He jokes with them. Overall, Rahill respects the serpentine beasts which have now made the Everglades their home.

"I learned a lot about snakes and gained a real respect for them,” said Swamp Ape Melanie Aycock. “I don't have a fear of them anymore. I respect them.”

Some days are better for hunting pythons than others. The ideal conditions include cold nights with misty mornings, forcing the cooled pythons to warm themselves by basking in the sun. On days like those, usually in January and February, hunters can usually drive down the road and nab snakes without even wading into the marsh.

Hunters are contributing to research regardless of whether a python hunt is successful. They strap on GPS modules for each search, which gives information about the whereabouts (or lack thereof) of pythons. This information gives SFWMD a better idea of where the snakes are so they can plan accordingly and send more hunters to specific areas to help nab snakes.

Rahill has grown to empathize with the pythons, but acknowledges they have to be killed for the good of the environment.

“It’s a bittersweet thing, but it has to be done,” he said. “The damage, left unchecked, could spread through the entire state of Florida.”

Each day brings a new challenge for the hunters. Some days they’re successful and bag several snakes in one go -- other days, the snakes play hide-and-seek with python hunters, burrowing away in grass near the river banks, waiting to be found.

But every time, Rahill says, is an opportunity to make a difference in the life of a suffering person -- all by being outside and hunting pythons.

"It evokes a lot of emotion in everyone when you catch a python,” he told Sunshine State News. “You have the opportunity to open up and bond with each other."

The initial focus of the

Permalink Submitted by Rhmooney3 on April 1, 2017 - 8:07am
The initial focus of the Swamp Ape group was clearing exotic invasive plants, as I recall. Hopefully, they are continuing to do so too. Mr Rahall claims to have gotten over 400 pythons. Is there documentation of that?

The initial focus of the

Permalink Submitted by Melanie Norwood... on April 2, 2017 - 10:31pm
The initial focus of the Swamp Apes (SA) group was and continues to be U.S. military veterans. The SA has taken on projects involving exotic plant removal/trail clearing and invasive species removal; however, the mission/focus has always been the veterans. The group has grown to specialize in python removal because it is by far its most popular activity. If the U.S. Geological Survey will share the documented capture count, then yes, there is a way to verify the number of pythons Mr. Rahill has caught. I hope this is helpful.

Put a bounty on them that

Permalink Submitted by The Trapper on March 31, 2017 - 7:45pm
Put a bounty on them that would encourage young school teachers who loathe snakes to run one over, get out and lop its head off and take it to the post office for $200. We don't need a bounty based on a bunch of government people that want to educate these guys and gals. We need a bounty large enough for the people that can really go kill the snakes to bother with it. And not people that want to get their picture in the paper.

Permalink Submitted by C Breeze on April 2, 2017 - 11:23am
...Makes sense to me,...If you're going to hunt them, then *HUNT* them ! The "bounty" is the only way (It's how the Buffalo was eradicated by the "Railroad" paid hunters who traded Buffalo hides for bounties)!!! We've got to stop "fiddle-phuquing" around by turning this "invasive-destruction" into a "social experiment" ( which is what "progressive-Liberals" LOVE to do)...

Permalink Submitted by Melanie Norwood... on March 31, 2017 - 3:59pm
Allison, great article. Thank you for spending time with us yesterday. Even though we didn't catch any pythons, the experience was well worth it.

Hi there. I am "Melanie

Permalink Submitted by Melanie Norwood... on April 2, 2017 - 10:38pm
Hi there. I am "Melanie Norwood Aycock" and "Melanie Aycock." I posted a comment here with my full name, and the system cut off my last name after "Norwood" and followed it with the period marks. Have a nice day.

Permalink Submitted by John Warzybok on June 15, 2017 - 8:03pm
Dear Melanie: You and I spoke briefly over the telephone several weeks ago. I also spoke with your husband and later on I did hear from Mr. Rahill. But since then I never heard anything from anyone again about coming down to Florida to join the Swamp Apes Team.

If I understood you article

Permalink Submitted by Ted S Herrle on March 31, 2017 - 11:26am
If I understood you article correctly there is a bounty on the pythons based on length

Put a bounty on them. The

Permalink Submitted by The Trapper on March 31, 2017 - 8:23am
Put a bounty on them. The Everglade fauna ecosystem is already toast. No marsh rabbits. No possums. No coons. No bobcats, No wading birds. They don't need to be studied, they need to be killed.