Andrew Gillum Isn't Going Anywhere, nor Should He ...

Remember the stories that surrounded Barack Obama when he first decided to run for president?

If I recall correctly, one person accused Barack of having sex and doing illicit drugs with him.

Of course, that made all the tabloid front pages.

It even got the guy an interview or two. What it didn't do is stop Barack Obama from becoming the 44th president of these United States.

Andrew Gillum is on the path to win the Democratic nomination to be governor of Florida. That is scaring the crap out of some people, and I love it!

People are saying Gillum is going to get the bulk of the 27 percent of black voters who will turn out during the primary.

Guess what?  He WILL! 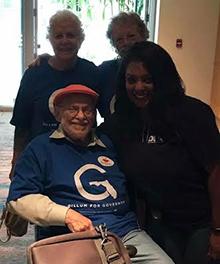 Guess who else will vote for him?  Progressives, white, Hispanic, old, young. Just like Barack Obama, Andrew EXCITES Democrats.

Listening to him doesn't put us to sleep. It makes us want to get involved.

Gillum is going to bring out those people who decided that they just didn't give a damn anymore.

In case it has slipped anyone's attention, 209,000 registered black voters stayed home in 2016.

How many white voters did the same?

Who is electrifying the circuit like Andrew Gillum right now?

Andrew Gillum scares these folks, just as Barack Obama did.

Gillum is no Obama, but he seems to be attracting haters in the same manner.

In the days of Trump, these roaches aren't afraid of the light!

Get your cans of RAID ready, Gillum supporters!

Leslie Wimes, a Sunshine State News columnist, is founder and president of Women on the Move and the Democratic African American Women Caucus, www.daawc.com. Follow Leslie on Twitter: @womenonthemove1

Permalink Submitted by Anonymous on June 28, 2017 - 11:47am
Leslie makes it sound like all blacks are voting for Guillum because they are black and he is black. What an insult. People like her are the ones that keep "racism" out there. Give blacks credit for voting for who is best and not for who is black. As for Obama, I wouldn't mention him in anything. He will go down as one of the worst presidents ever. Regretfully, I voted from him twice. That is the problem with politics. Instead of voting for who is best, you vote for who can do the most for you. I am a black Democrat not voting for Guillum.

With Leslie on the Left and

Gillum is a far left shill

Permalink Submitted by Franklin Thompson on June 23, 2017 - 5:29pm
Gillum is a far left shill for People for the American Way...which it is not. We cannot afford another one in any position of power.

I have a lot of empathy for

Permalink Submitted by Tampaguy on June 23, 2017 - 5:22pm
I have a lot of empathy for the Black folks in Florida. They really have a lot more power than they realize. The smart ones won't buy Gillum, the uneducated really don't know who to vote for --- and they will stay home.

Mr. Gillum has as much chance

Permalink Submitted by The Trapper on June 23, 2017 - 5:12pm
Mr. Gillum has as much chance of becoming governor as I do. Remember Kilwanneabasteebee Kilpatrick? Aint much difference cepting Andrew didn't play football. Remember Detroit!

Permalink Submitted by Lt16c on June 23, 2017 - 2:48pm
The last thing Florida needs is a left wing radical for governor.

I hope it is Gillum against

Permalink Submitted by Daniel on June 23, 2017 - 2:37pm
I hope it is Gillum against Putnam! And hopefully Gillum brings Pelosi to endorse him all around Florida. Putnam has integrity, and for any poster on here to suggests otherwise is disingenuous, or ignornat to, or both. And Wimes, you're a freaking racist. Your commentary sounds more like a paid advertisement. Calling anyone endorsing Trump friendly to roaches makes you an apparent crackhead. Start writing subststantive articles, not love & hate letters every week. Just because you think it doesn't make it true. You're paid for these gushy letters?

Permalink Submitted by Daniel on June 24, 2017 - 12:54am
You didn't read Wimes' exposé? Apparently right-wingers are roaches.

hahaha! I love the way Leslie

Permalink Submitted by Anonymous on June 23, 2017 - 2:46pm
hahaha! I love the way Leslie jerks the chains of some of these people! Her columns give me life!!

I don't favor ANY candidate

Permalink Submitted by RGB on June 23, 2017 - 1:53pm
I don't favor ANY candidate for governor, that hasn't gotten some experience under their belt at the state level. There are too many potholes in the road before them once in office. Trump and Scott are great examples. Yea,some are good, but those that are exceptional have the experience beyond City Hall. Oh and Tallahassee doesn't have the same or similar problems as Orlando, Miami, Lauderdale, or Tampa/St.Petersburg. Give Gillum some time and experience and he will be a GREAT candidate and maybe an exceptional governor. Just don't rush to the BIG CHAIR too quickly. Governor Martinez did and well...... And here are people in Georgia that still regret voting for Jimmy Carter as Governor. Andrew Guillum has potential. Let him build some experience and let the younger voter base grow. Let the fruit ripen.

No experience. Same was said

Permalink Submitted by TPena on June 23, 2017 - 2:50pm
No experience. Same was said of Barack Obama when he ran in 2008. Guess what happened? He won and work to pull this country out of the crap Bush left the country. Those that lead revolutionary vision get things done.

Permalink Submitted by Tampaguy on June 23, 2017 - 5:17pm
...like DOUBLE the National Debt, kill the American auto industry, get MORE people on Medicaid and Food Stamps, open our Southern Borders, and BOW to all Muslim Country Leaders, and give even MORE Foreign Aid to Leftist Countries? Yeah, he got things done - by KILLING America!

Permalink Submitted by Anonymous on June 23, 2017 - 1:43pm
That's a pretty broad coalition of voters Gillum has there. If he can bring out that variety of Dems, we can win this thing!!!

The only "roach" I see is a

Permalink Submitted by Looking for Justice on June 23, 2017 - 1:42pm
The only "roach" I see is a candidate who thinks he can steal from the city and when he gets caught, pay back the money, say he's sorry then walk away with no repercussions He's sorry he got caught - nothing more. The man has no integrity.

THIS white, panhandle Dem is

THIS white, panhandle Dem is

Permalink Submitted by Bugsby on June 28, 2017 - 11:33am
THIS white, panhandle Dem is NOT Gillum!!! Has absolutely nothing to do with race.

You are finally right about

Permalink Submitted by truth on June 23, 2017 - 1:36pm
You are finally right about one thing... Gillum isn't going anywhere at all! He'll be lucky to finish 3rd. King is the most exciting and the most likely to initiate real change. However, sadly Graham will win the nomination and it won't be close. She would still be better than this same old crap we have up there now, and that's exactly what Opie would bring...more back room deals, gut education, and cash to big business...nothing for regular tax payers...

Permalink Submitted by John on June 23, 2017 - 1:28pm
Tallahassee headlines this morning is Gillium under investigation by FBI as other city officials are. Grand Jury has issued suppose for some of his city records, votes, and emails

It's kind of hard not to

Permalink Submitted by Charlotte Greenbarg on June 23, 2017 - 1:14pm
It's kind of hard not to notice all of the problems he has. Every day there's another investigation. Yes,he'll get all of the black vote, and some of the others you mention. But to call anyone who opposes him on grounds that he's got too much serious baggage, not his first grade teacher kind of stuff, "roaches" is just the hyperbole and insulting rhetoric that voters have had enough of.