Citing widespread problems during the 2018 elections, Gov. Rick Scott on Friday suspended Broward County Supervisor of Elections Brenda Snipes and replaced her with one of his closest allies, Pete Antonacci.

“Due to her demonstrated misfeasance, incompetence, and neglect of duty, Supervisor Snipes can no longer demonstrate the qualifications necessary to meet her duties in office,” Scott wrote in an executive order issued late Friday.

Antonacci, who most recently has served as president and CEO of the economic-development agency Enterprise Florida, will remain in the post until a new supervisor is elected in November 2020, according to Scott’s office.

Snipes, who was appointed by former Gov. Jeb Bush in 2003 and has been re-elected four times, came under harsh criticism for numerous voting problems in 2018 and in previous elections.

Scott, a Republican, ran for U.S. Senate this year and ultimately defeated Democratic U.S. Sen. Bill Nelson following a manual recount. But in the chaotic days after the Nov. 6 election, Scott sued Snipes and Palm Beach County elections supervisor Susan Bucher, branding the two elections chiefs as “unethical liberals” and accusing them of trying to “steal” the election. 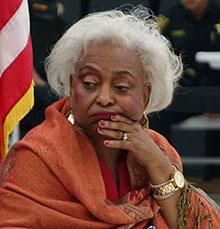 A circuit judge ruled that Snipes had failed to provide public records requested by Scott’s campaign and others, Scott noted in the order.

Snipes also improperly permitted staff to open provisional and mail-in ballots that had not been examined by the county canvassing board and failed to keep ballots that had been accepted and rejected by the board “appropriately segregated,” Scott’s executive order said.

While the Broward canvassing board completed a machine recount before a state-ordered deadline, Snipes failed to submit the results to the state Division of Elections before the deadline passed, Scott’s order said.

Snipes also said more than 2,000 ballots had been “lost, misplaced, or misfiled” between Nov. 6 and Nov. 15, but that the missing ballots were “somewhere ‘in the building’” but has not provided an explanation, the governor wrote.

The executive order also cited a litany of Snipes’ previous election mishaps, including early posting of some elections results in 2016, the same year that her office mailed out ballots that failed to include a constitutional amendment.

After repeated demands --- largely by Republicans, including President Donald Trump --- that Snipes be stripped of her post, she submitted a letter of resignation to Scott on Nov. 18, effective Jan. 4.

But in removing Snipes, Scott wrote that election supervisors “must carry out their duties in a manner consistent with state and federal law to preserve public confidence in the integrity of the elections process and the competence of elections officials.”

Scott grew increasingly frustrated with Snipes and Bucher as he watched his 56,000-vote election-night lead over Nelson evaporate as the South Florida supervisors continued to tally mail-in ballots. After statewide machine and manual recounts, Scott remained the winner in the race, ultimately topping Nelson by a little more than 10,000 votes.

Antonacci was hand-picked by Scott last year to head Enterprise Florida, a public-private agency that was under fire at the time.

In March 2012, Scott appointed Antonacci to complete the term of Palm Beach County State Attorney Michael McAuliffe, who had left for a job in the private sector. After Dave Aronberg was elected to the state-attorney job later that year, Antonacci became Scott's general counsel, a post he held until early 2015. He also has served as executive director of the South Florida Water Management District.

Typical. A fox to guard the

Permalink Submitted by Voted Blue on December 3, 2018 - 10:53am
Typical. A fox to guard the henhouse! Pure putrid partisanship will ultimately create w-a-y more problems than it can ever resolve.

I SAY THANK YOU GOVERNOR

Permalink Submitted by ORC on December 2, 2018 - 2:56pm
I SAY THANK YOU GOVERNOR SCOTT AS WELL. SHE IS NEVERTHELESS A FELON!!! THOSE VOTES ARE NOT HER PROPERTY!!!

"Suspend?!" Are you kidding?

Permalink Submitted by Anonymous on December 1, 2018 - 10:35pm
"Suspend?!" Are you kidding? How about investigate and prosecute the obvious corruption?! To not do so is to be corrupt, too.

Permalink Submitted by Melissa Howard on December 1, 2018 - 9:28pm
He removes an incompotent buffoon and replaces her with an idiot. Nobody wins here!

So why do you call this man

Permalink Submitted by Mike Roberts on December 2, 2018 - 5:04pm
So why do you call this man an idiot? Do you have someone else in mind?

Permalink Submitted by Lynn Siebert on December 1, 2018 - 8:03pm
Governor Scott doesn't mess around. He acts when it is needed. Thank you Governor Scott!

I’m a FL native and Snipes

Permalink Submitted by PLMiller on December 1, 2018 - 12:55pm
I’m a FL native and Snipes and company are a total embarrassment and should have been removed in 2016. Thank you Governor Scott.

Big THANK YOU to Governor

Permalink Submitted by Dave Manning on December 1, 2018 - 12:06pm
Big THANK YOU to Governor Scott for firing a corrupt liberal democrat witch (Snipes). Yes, she should lose her pension but someone should start a GoFundMe account so that she can buy a James Brown wig like her counterpart, Maxine Waters wears. Nice move to replace her with a good honest Republican man, hope the Dems get a good whiff for the next two years and probably beyond that.

This wasn't a people problem.

Permalink Submitted by BobH on December 1, 2018 - 7:47am
This wasn't a people problem. This was a voter system problem. Archaic old paper counting machines. Not used to record voter turnout. There's no reason we can't move into the 21st Century with voting procedures and mechanisms. Just stop blaming people. So now we're stuck with cronyism. Nice move Rick. Let's solidify voter suppression, and make sure every "Republican" vote counts. When are you people going to learn. Republicans don't give a rats rear end about you.

Permalink Submitted by Voted Blue on December 3, 2018 - 11:02am
The one-party GOP government in this state only supports its own tribal members ... and Broward, Palm Beach, and Dade county are the "other" tribe. No interest whatsoever in doing what's right for the greater public at large. Schmucker Scott has done everything possible to shortchange the Democratic vote in those three counties ... including shortchanging them in terms of election budgets and equipment ... along with two rounds thus far of gerrymandering and continuing voter suppression regulations in every election.

What a blatent disregard for

Permalink Submitted by TimA on December 1, 2018 - 9:56am
What a blatent disregard for that incompetent POS ACCOUNTABILITY! You must be a liberal one,as well, no doubt. Another butthurt loser complaining. YAWN.....

Republicans came out to vote

Permalink Submitted by Joan Alsup on December 1, 2018 - 9:03am
Republicans came out to vote for Sen. Scott so that President Trump could count on his support Flake imitators popped up during an important vote in the Senate.

Permalink Submitted by RepublicanConscience on December 1, 2018 - 6:41am
Looks like Broward just became Republican. Let the voters decide when the corruption is drained from the department.

Not only Snipes and Bucher

Permalink Submitted by ReelEstate on December 1, 2018 - 5:48am
Not only Snipes and Bucher are the crooks but lets add in Gertrude Walker of St. Lucie County! Now the big question...Is she going to get her Pension??? She (all) of them should be fired no pensions and JAILED!

What for! I got to love you

Permalink Submitted by BobH on December 1, 2018 - 7:38am
What for! I got to love you Republicans. When things don't go your way, cut the legs off the supposed problem. PEOPLE. She worked in government service. AND up until now, without complaints. She deserves a pension, just as much as your fellow Republican Voter suppressionists. This was a person problem. This was an outdated voting mechanism problem. And that's a State Government issue. Not a local County issue. You people never cease to amaze me, with your tantrums.

It appears Snipes and Bucher

Permalink Submitted by Linda Hoskinson on November 30, 2018 - 10:51pm
It appears Snipes and Bucher are the crooks. Incompetent appears to be a problem in Broward and Palm Beach Co. For decades.

The right decision by the Gov

Remove a elected official and

Permalink Submitted by Joey on November 30, 2018 - 9:03pm
Remove a elected official and put a friend of him. Thats sounds good? Is up to the voters to pick a replacement. Crook Scott is already try to stole the elections in 2020 for Trump.

Says an illiterate that can't

Permalink Submitted by TimA on December 1, 2018 - 10:01am
Says an illiterate that can't spell. Another butthurt liberal loser. WAAAAYYYY.