Nearly 11,000 people packed the streets of Tallahassee Tuesday morning to demand a stop to a lawsuit which would end a statewide program which allows around 78,000 low-income minority students to attend private and religious schools of their choosing.

Over 200 buses shuttled supporters of the program to the state’s capital city Tuesday morning for the rally. Supporters came from far and wide, some leaving home at 1:30 a.m. from all the way in Miami-Dade County.

Led by Martin Luther King, III, educators, parents, teachers, students and concerned members of the public filled the downtown Tallahassee area, setting up between the State Capitol and the Florida Supreme Court.

“This is about freedom, the freedom to choose what's best for your family,” King told the crowd. “That's why we're here today, because we're standing on the right side of what's right for our children.”

Other civil rights leaders from around the state chimed in with their support of the program, saying it was a key to success for students who wouldn’t be given the opportunity at academic excellence in a regular public school. 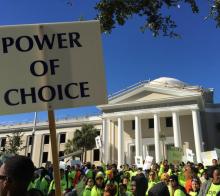 “The tax credit scholarship, which is now 15 years old, is an equalizer,” said Miami Bishop Victor Curry, a civil rights activist and supporter of the voucher program.

Florida’s Tax Credit Scholarship currently serves 78,000 students, most of whom are low-income minorities. Students participating in the 14-year old program are given “vouchers” to attend private schools of their choice as opposed to attending a regular public school.

Companies who give money to the scholarship program are given tax credits equal to their donations.

That program is under attack, however, from several groups across the state. Led by the Florida Education Association, the groups  have filed a lawsuit against the voucher program, alleging it is unconstitutional because it takes money away from the state’s public education system.

The suit pits the FEA, which represents over 137,000 teachers statewide, against the voucher program which gives about 78,000 students across the state a “scholarship” to attend a private or religious school of their choosing.

Last year, Circuit Judge George Reynolds threw out the suit, saying the program did not cause financial damage to the state’s education system. Reynolds also ruled the plaintiffs did not have legal standing to pursue the case.

The FEA appealed the ruling, saying it would take the lawsuit all the way to the Florida Supreme Court if necessary. The FEA held its own rally demanding education reform at the Capitol last week. Around 2,000 teachers made the trek to Tallahassee to protest high-stakes testing and the student voucher program among several other education issues.

Despite the protest, the FEA said it wasn’t going to budge on the suit, questioning voucher backers what they were “so afraid of” if the lawsuit proceeded in the courts.

“For more than a year, voucher groups have been demanding FEA drop a lawsuit challenging the constitutionality of the tax-credit vouchers. What are they so afraid of going to the courts to ensure this voucher scheme is legal?” asked FEA President Joanne McCall. “Let’s let the courts decide this once and for all. We’re not dropping our legal challenge.”

Other plaintiffs chimed in on the rally, saying they, too, had no intentions of backing down from the lawsuit.

“Circumventing the law by allowing corporations to shift their tax obligations to private foundations supporting scholarships to private schools is a legal maneuver. Florida lawmakers need to stop trying to find tricks that only shortchange our students, and concentrate on sustainable funding for quality public education," said League of Women Voters of Florida President Pamela Goodman.

Rally attendees seemed to not be disheartened by the opposition -- many joined together at the end of the rally, singing “We Shall Overcome,” a song which rose to prominence during the civil rights movement of the 1960s.

On Tuesday, the song became the anthem for the thousands of protesters in Tallahassee, giving them hope the program which provides their children and students with more education options would not be taken away.

How about taking the billions

Permalink Submitted by wanda on January 20, 2016 - 10:50am
How about taking the billions of dollars received from the lottery every year and really use it for the school systems, teachers get their dutified raises, parents can select what program will benefit their child and administrator can divide the rest.

Every family should have the

Permalink Submitted by Charlotte Greenbarg on January 19, 2016 - 7:22pm
Every family should have the right to choose. Having said that, all schools needs to be held to high fiscal and educational standards, with the caveat that Common Core should not be the means of evaluation.

This has nothing to do with

Permalink Submitted by Mark on January 19, 2016 - 3:29pm
This has nothing to do with cival rights it's about profit for private schools. This is a Koch funded education plan.

Permalink Submitted by Edgar Berrios on January 22, 2016 - 11:56am
Private schools are providing quality education with aproximately 35% less funding than the traditional system. They are not getting rich! They are actually saving millions to the FL DOE!

Much smaller schools ... in

Permalink Submitted by Anonymous on January 19, 2016 - 3:01pm
Much smaller schools ... in the neighborhoods ... with involved parents ... plus sincere and consistent parental support (back to 'in loco parentis' + proper discipline rules and regulations) ... all necessary to create the proper ENVIRONMENT FOR LEARNING ... is what's needed to improve primary, elementary, and secondary education ... not vouchers.

That is not true, my son has

Permalink Submitted by Jenifer Clines on January 21, 2016 - 4:31pm
That is not true, my son has disabilities and he was failing miserably in a Public school. I would get a phone call everyday asking me to pick him up, he was miserable there. He is now in a private school and is getting A's and B's and the teachers know how to handle him and he loves it and I don't have to fight with him to go to school. The vouchers work to be able to send your kid to a private school if the Public school system does not work for your child.

What is your priority? The

Permalink Submitted by James Burnham on January 19, 2016 - 2:41pm
What is your priority? The kids and their parents or the unions. I vote for the kids and parents.

We never learn. None of us.

Permalink Submitted by Mark on January 19, 2016 - 2:39pm
Here's a new idea....how about everyone attends their own neighborhood school and if any teacher performs poorly, terminate them! No more Tenure!!!

This is no tenure. Keep up