2015 Florida Legislature Finally Gets It Done, Adjourns With $79 Billion Budget

With a $78.7 billion state budget approved -- and approved unanimously in both chambers -- two white handkerchiefs fell to the fourth floor of the Capitol Rotunda Friday evening, ending the marathon 2015 Legislature, including a three-week-long special session. It now rests with Gov. Rick Scott.

The budget received its final committee approval late Monday evening. By Friday, state lawmakers headed back to their respective chambers after the 72-hour “cooling off period” and then voted on the budget, ending the session Friday evening.

At the end of the session, members of both chambers came together to pass a balanced state budget, even if everyone wasn’t completely happy with the way the money was allocated.

The Senate was the first chamber to give the budget the green light, passing it unanimously. A little over half an hour later, the House of Representatives followed suit, also passing the state budget by a unanimous vote.

The special session solely focused on Florida’s record-high $78.7 billion budget, which is the only business legislators are actually required to accomplish each year. Negotiations over this year’s budget seeped into June as a result of a stalemate over whether Florida should pass Medicaid expansion.

That topic even made its way to the special session, with the Senate fighting tooth and nail to get a measure expanding Medicaid approved. Ultimately, their efforts were fruitless and the proposal failed, forcing lawmakers to shift their focus to other issues, particularly passing a $430 million tax-cut package and funneling money to hospitals.

The biggest cut is a communications tax cut totaling $207 million. Cuts would extend to cable, phone and satellite services and should save Floridians with $100 monthly cable bills around $20 over a 12-month period. That cut could start as early as July 1.

Yet, despite the large tax-cut package, some state senators accused the House of being the culprits behind cuts to the budget, saying their refusal to expand Medicaid was what caused certain cuts to fall short of their anticipated levels.

“The reason we didn’t have as robust of a tax package as we wanted is because the House didn’t want to go along with us [with] the FHIX plan,” said Sen. Darren Soto, D-Orlando. 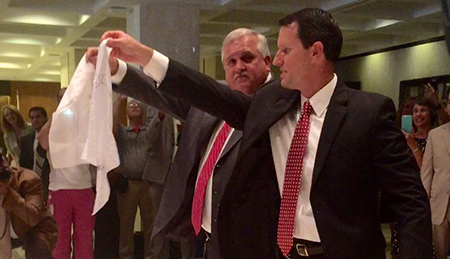 House members said hospitals would have to come to terms with the realities of Low Income Pool funding.

“I think that what the hospitals really have to realize is that there isn’t a long-term solution,” said House budget chairman Rep. Richard Corcoran, R-Land O’Lakes. “They have built up a business model with a huge supplemental group of payments and they’ve built their model around that ... I think the hospitals need to start making huge strides in recognizing that that [LIP funding] will not be around forever.”

Despite the drama over Medicaid expansion, crafters of the budget explained they didn’t think the wounds between the two chambers would carry on beyond this year.

“Time is an ally here,” said Sen. Tom Lee, R-Brandon.  “Some of these issues still exist. Decisions have to be made about how we are going to address them long-term. Probably a lot of it has to do with how well everybody can come together over long-term solutions. I wouldn’t predict any of this is going to spill over into the future.

Gov. Scott has 10 days to sign the bill into law.

Permalink Submitted by Lynn Rowe on June 21, 2015 - 10:12am
Shameless. Vote the poltical cronies out of office. This will stand as long as the People allow it. GET MAD.

A record budget and Palm

Permalink Submitted by Chris Mann on June 20, 2015 - 11:26pm
A record budget and Palm Beach County educators got a raise of 2/3 of a percent. Pathetic Florida. Absolutely pathetic!

Permalink Submitted by Frank on June 20, 2015 - 4:11pm
Unconstitutional budget - violates Florida's constitution (Article X. Section 28) . . . . . perhaps the "people" need a legal means to remove and ban legislators who so blatantly and openly violate the state's constitution . . . . . . to engage in such nonsense, against the clear will of Florida's citizens, as Senator Hays and Representative Crisafulli did in this budget, is simply . . . . . . . . . . PATHETIC . . .

Thanks for the update, Sajan.