All for Transportation Hires Big-Gun Lawyers to Shut Down Lawsuit

AFT recently filed to be an "intervener" in the lawsuit, filed against the county and other parties receiving the new tax proceeds. An intervener basically joins the lawsuit and becomes a party in it.

The presiding judge will decide whether AFT has "standing" to become an intervening party to the entire lawsuit or a particular count or counts of the lawsuit.

All for Transportation, funded by Jeff Vinik and his special interests allies, hired big-gun attorneys Barry Richard and Ben Hill to represent them. Barry Richard represented George W. Bush during the 2000 election recount and recently represented Andrew Gillum in the governor's race recount.

Richard concentrates in appellate law, indicating AFT must think this case will be decided at the appellate court, not trial court level. Richard is in the Tallahassee office of the prestigious Greenberg Traurig law firm.

The attorneys in this firm are very well connected and expensive, so we will watch AFT's next campaign filing in January to keep an eye on their legal expenses. AFT had over $160K left in their $3.9 million special interest-funded war chest. More donations may be flowing in from the same wealthy special interests who financed All for Transportation's tax-hike marketing campaign to now fund its expensive legal team.

Perhaps AFT anticipated a lawsuit because they were questioned before the election but refused to answer. According to this Dec. 4 Tampa Bay Guardian article:

"AFT chairman Tyler Hudson knew about this potential legal snag at least as early as July 5. That is the day the Guardian asked Hudson about this very issue in an e-mail. The Hillsborough county attorney’s office was copied on our e-mail to AFT so that our questions to AFT would be in the public record.

"In that same e-mail, we also asked if AFT had obtained “a legal opinion on its petition before it started gathering signatures.” Despite repeated e-mails and calls by us to Hudson and his assistant, we received no response and published our article on July 7."

County charters are governing documents. The power for a county to implement a charter is granted by Florida State statute. Charter counties have all powers of self-government unless they are inconsistent with the Constitution or state law.

"The rate shall be up to 1 percent.

"The proposal to adopt a discretionary sales surtax as provided in this subsection and to create a trust fund within the county accounts shall be placed on the ballot in accordance with law at a time to be set at the discretion of the governing body.

"Proceeds from the surtax shall be applied to as many or as few of the uses enumerated below in whatever combination the county commission deems appropriate: ...

Obviously, there is no such thing as a one-cent sales surtax. One cent is not a rate. According to Investopedia: "A tax rate is the percentage at which an individual or corporation is taxed."

Who has responsibility for appropriating local transportation sales surtax proceeds approved by voters? State statute clearly states it is the county commission who has the authority for deciding how the tax proceeds are appropriated. An unelected bureaucratic committee cannot be held accountable.

State statute also clearly states that any sales surtax proceeds remitted to Hillsborough Area Regional Transit (HART) is to be used at the discretion of the transit agency which has its own decision-making governing board. Such discretion means HART gets to decide how and where to spend the tax proceeds. But the 5-page charter amendment mandates how HART must spend the money for 30 years.

Florida state legislators would not convey appropriations authority for sales surtax proceeds to an unelected committee or to mob rule. If the governing bodies are not responsible for appropriating the tax proceeds, no one can be held accountable. The state would not put taxpayers at such risk.

AFT publicly touted in their own marketing campaign mailers that duly elected officials do not have a say in how their massive tax-hike proceeds are spent. 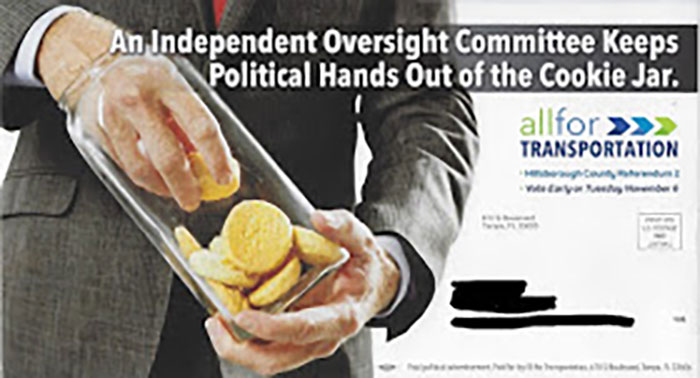 The motion to intervene filed by AFT's lawyers on Dec. 19 requested that the court "hold an expedited hearing on their Motion to Intervene ...". It appears that expedited hearing has not happened nor has it been scheduled. Why not? Were AFT's high-priced lawyers not ready after they said they were?

Citizen initiatives requesting to place a state amendment on a Florida ballot requires the Florida Supreme Court to review the initiative. In 1986, the Florida electorate voted for a constitutional amendment stating:

"The attorney general shall, as directed by general law, request the opinion of the justices of the Supreme Court as to the validity of any initiative petition circulated pursuant to Section 3 of Article XI. The justices shall, subject to their rules of procedure, permit interested persons to be heard on the questions presented and shall render their written opinion expeditiously."

It appears there is no such legal review for local citizen-petition initiatives.

We were told by multiple sources there was disagreement about this charter amendment tax hike amongst those who provide legal counsel to the entities receiving the tax proceeds. When there's differing opinions among those providing legal counsel to the recipients of the tax proceeds, that is a red flag. It is certainly reasonable for anyone to be concerned there is something legally wrong with the tax-hike charter-amendment language.

Voters in Hillsborough County were misled if any part or all of All for Transportation's 5-page tax hike amendment violates or does not comply with state statute/state law.

And Commissioner White would not be the only aggrieved party.

Taxpayers will become an aggrieved party if they are forced to start paying the additional 1 percent sales surtax on Jan. 1 for a tax hike that is determined to violate state statute/state law. Once the additional tax is collected, there is no way to refund it to the taxpayer who paid it.

Who's representing the taxpayers in this mess? It looks like they need an intervention.

AFT is now claiming they thoroughly vetted their 30-year, 5-page, $16 billion tax-hike charter amendment. However, they never provided the voting public any information to back up such a claim and AFT refused to answer questions when asked in July by Tampa Bay Guardian.

All for Transportation created their own can of worms by not being truthful and transparent. They were allowed to hide behind an irresponsible local media. The irresponsible local media refused to ask AFT any questions because they were in the tank for the tax hike and financially dependent on the wealthy special interests who funded AFT's campaign.

The result of AFT's and local media irresponsibility is Commissioner White's lawsuit.

All for Transportation claims Commissioner White's lawsuit is frivolous, so they hired big gun lawyers to shut it down.

Any and all legal questions associated with All for Transportation's tax hike charter amendment must now be publicly answered in a court of law.

First and foremost the rule of law must be respected.

Sharon Calvert is a conservative activist. With her husband, Mark, she writes the blog Eye on Tampa Bay, where this commentary first appeared.

Permalink Submitted by Jeanne Webb on January 7, 2019 - 7:52pm
Thank you Commissioner White and Mr and Mrs Calvert for giving the citizens of Hillsborough County the governing law of the Florida Statues that ALL citizens are required to follow. Thank you Commission White for representing your constituents and filing the lawsuit . The majority of the 1 cent tax increase will only benefit the special interest who have invested in the development of downtown Tampa. They have been attempting for years to get the tax payers of Hillsborough County to pay for rail which will only be in selected areas of Tampa. The individuals who lived in subsidized housing in downtown Tampa have been moved out to make room for the special interests new high priced high rise developments. The rail will never going anywhere but downtown. The rail will never be self sustaining once it developed. The county tax payers will always have to subsidize it and only a few will use it. If it is such a grand idea, why won't the billionaires who are developing downtown Tampa pay for it themselves? The best advertising that money can buy was paid to manipulate the county voters, I am one citizen and voter in Hillsborough County that is glad to that the Law applies to all people equally regardless of how much money one might have.

Permalink Submitted by Walt S. on January 3, 2019 - 6:39am
Sharon keeps dumping all kinds of garbage on local transportation so that she can get what she really wants - to allow the state to blow billons on toll lanes on our interstates - even if she herself doesn't use them.