When I arrived in Stuart in 1977, a local man by the name of Willie Ray Cox was in the middle of a 12-year prison sentence for embezzling money from a number of churches.

Willie was 68 in 1977. He had advanced Parkinson's Disease. He also had a nephew who wanted to take care of him at home. But the law said no, no release for Willie -- he wasn't ready and it wasn't time.

I remember Willie because I marshalled a couple of stories The Stuart News wrote about his situation -- his declining health, his failure to win parole and the thousands upon thousands of dollars the state was paying for his care. 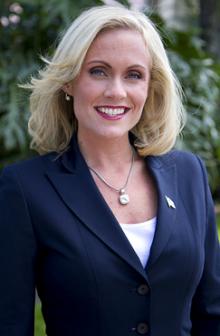 The News editorialized about the absurdity of a paralyzed justice system, but, of course, it didn't matter. Willie died in prison.

Fast forward to Jan. 25, 2017 -- 40 years later -- and finally, a bill emerges from the Legislature that, if passed, will take care of all the Willie Ray Cox situations to come, and more.

Understand, House Bill 535  is no bleeding-heart bill. By processing out senior-citizen prisoners who were convicted of non-violent crimes, the ones who pose little-to-no risk to the public, then the state stands to save $75.5-to-$79.9 million.

The good thing is, this is Rep. Katie Edwards' bill, and Edwards, an attorney, always comes prepared. You have a question about how this bill is going to work? She'll have the answers.

"The huge growth of the elderly inmate population in Florida's prisons is imposing an unsustainable fiscal burden on Florida taxpayers," Edwards explained in a Jan. 25 statement rolling the legislation out. "... An elderly inmate release program is a common-sense, fiscally responsible measure that will save money while reducing the strain on our correctional officers and reducing prison populations sensibly."

Florida TaxWatch has researched the issue, too. It has found that elderly prisoners might make up only 20 percent of the prison population, but they account for $200 million of the $400 million healthcare budget for the Florida Department of Corrections. TaxWatch estimates that a release of just 750 elderly prisoners would save Floridians up to $40 million a year.

Said the organization's president and CEO, Dominic M. Calabro, "Florida TaxWatch research demonstrates that supervised conditional elderly release for these prisoners would not only lessen the financial burden on our prisons and jails, but would also save taxpayer dollars without a negative effect on the safety of Floridians."

If enacted, HB 535 would create a program for supervised conditional release of certain elderly inmates -- the ones who meet specific standards from their age and the nature of their conviction and sentence to their parole eligibility and behavior during the time they've been incarcerated.

An extensive petition would be filed with the Florida Commission of Offender Review for evaluation and final decision making. All aspects dealing with release will be conducted in a meeting that is open to the public, at which involved parties may submit an oral or written statement. In coming to their decision, the commission will consider the entire criminal, prison, medical, and work history as well as other aspects relating to reform while incarcerated.

With decision of release, the commission will approve a release plan and terms of supervision which may include community service requirements, electronic monitoring, and restitution to victims.

The bill calls for the Florida Department of Corrections to develop and implement healthcare standards that specifically consider the needs of inmates older than 50 years of age. That includes determining whether an inmate to be released would be eligible for enrollment in Medicaid or Medicare, and health-care officials would help connect each of them, if necessary, to charities statewide that work to find shelter for released prisoners who need it. It's an important part of the legislation.

"Elderly and infirm prisoners are, on average, the least dangerous and most expensive class of inmates. Representative Edwards' bill will limit unnecessary incarceration of people who pose no threat to public safety," offered Greg Newburn, state policy director for Families Against Mandatory Minimums. "These reforms will ease pressures on Florida's prison system, and allow more useful investments in public safety, without raising taxes or increasing spending. We're grateful to Representative Edwards for her continued leadership on this important issue."

Edwards' cosponsor on 535 in the House is John Cortes, D-Kissimmee, a retired corrections officer and Democratic ranking member on the Health Innovation Subcommittee. Senate Bill 606, filed by Jeff Clemens, D-Lake Worth, is the upper chamber's companion bill.

It's hard to believe this legislation has taken so long. It's way past time. But I feel good about it, in particular with justice reformer Edwards behind the wheel. Now if it can just reach the floor of each chamber.

Did You Vote for Trump? Run Far and Fast from 'Knights for Socialism'

Tea party extremists, with their tin-foil-hat image and conspiracy theories, may be the butt of jokes by the establishment, but to the best of my knowledge, they're all sticks and stones and if push came to shove, wouldn't hurt a fly.

Not so, the scary bunch at the opposite end of the political spectrum.

I'm talking about "socialist extremists," they're right here at the University of Central Florida, and they'll send shivers up your spine. These folks called "Knights for Socialism" are hosting an event Sunday -- yes, the Sabbath -- advertised as "Leftist Fight Club: The Rumble at Lake Claire" -- on UCF's main campus. 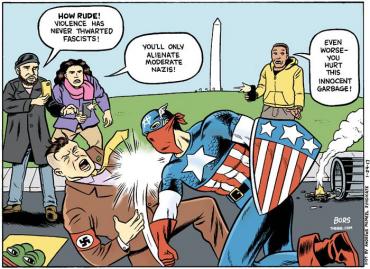 What they want to do is show you how to knock the block off Trumpies. Hurt them before they hurt you.

The Knights may or may not all be students of the university.

Ostensibly, the Leftist Fight Club is "a self-defense training class that will teach attendees how to 'defend themselves' against physical violence from people they identify as Neo-Nazis or members of the Alt-Right," says Jacob Engels in the East Orlando Post.

But the Knights actually go beyond self-defense: "... Knights for Socialism has decided to host a series of self-defense clinics for anyone that wants to BASH THE FASH," they say in their ad.

Are you one of the FASH? If you voted for our "commander in thief" (Knights' words), I'll bet you are.

In the contest to find the scariest, most extreme bunch of political idiots, I'm sorry, tin-foil-hatters. You lose.

As long as the socialist extremists are gathering at the second largest university in the country clenching their fists, teaching punches, preparing to BASH THE FASH, they win.

In fact, you might want to duck and cover.

Reminds me of the old Fram

Permalink Submitted by balance of power on February 6, 2017 - 8:59am
Reminds me of the old Fram commercial, "You can pay me now, or pay me later". This bill makes sense...for a change...classic.

So, an elderly, sick inmate

Permalink Submitted by T_BVII on February 4, 2017 - 9:04pm
So, an elderly, sick inmate is released. Who will hire an elderly, sick, convicted felon? This person will do whatever is necessary to survive, including breaking another law. Assuming the person stays within the community, how will he/she earn enough money to pay his expenses PLUS probation expenses? I'd bet my bottom dollar there will be no savings; only a shift in which agency, municipality, or governmental agency pays. After all, his/her needs and expenses haven't somehow disappeared simply because he/she is no longer incarcerated.

Permalink Submitted by Anonymous on February 6, 2017 - 3:23pm
Read the bill, fool. Edwards covered all your questions. As for "who will hire an elderly, sick convicted felon?" The answer is nobody. These are senior citizens on medicare or if they haven't reach the age yet they are on disability. There are charitable organizations that exist only to deal with people like this. Why should we keep them at in our prisons?

A great bill by an individual

Permalink Submitted by Anonymous on February 4, 2017 - 11:42am
A great bill by an individual I am proud to call my State Representative. It's time to stop pouring inexplicable amounts of tax dollars into our incarceration system.

Permalink Submitted by C Breeze on February 4, 2017 - 11:38am
SHUT UCF DOWN permanently !... The U is just too damn BIG, and "invites by virtue of group anonymity" outside activists ((lately "bussed in" masked activists to colleges all across the nation)) to enter the campus and create mayhem, damage and injury to students. It MUST be stopped, or there WILL be increasing bloodshed !

So, regardless of their crime

Permalink Submitted by Mark on February 4, 2017 - 10:08am
So, regardless of their crime, let 'em loose because of their ages. Reminds me of why juveniles aren't punished more severely, ...their ages.

Now about their health care,

Permalink Submitted by Robert Warner on February 4, 2017 - 9:22am
Now about their health care, once released....