The Everglades Foundation desperately needs to star in its own movie every time the cameras roll. This isn't an insult, it's just an observation. Like a diva, this environmental overseer is used to being treated with kid gloves whenever it makes an appearance. It's used to being cheered. Adored.

So, when the South Florida Water Management District (SFWMD) called it out Monday in a pragmatic letter that outlined Foundation scientist/engineer Tom Van Lent's "south reservoir" errors, the Foundation's reaction was indignation. It pitched a fit.

Van Lent didn't apologize. He didn't admit his scientists used a sledgehammer on the truth. He didn't admit the object of the exercise was to jolly up numbers so a south reservoir would look superior to a north reservoir. All he did is cry foul. The foundation's been attacked ! And how dare the Water Management District?

"Clearly, your agency ... is using this primarily as an attack piece, as evidenced by the nearly complete lack of specific technical information and considering this was supposed to be an engineer-to-engineer letter," head scientist Thomas Van Lent responded to SFWMD chief hydrologist Akintunde O. Owosina. Read Van Lent's letter dated Thursday in answer to Owosina's Monday letter.

In his conclusion, Van Lent said this: "In summary, I respectfully disagree with your offered critique, finding it baseless. Moreover, I condemn your use of a letter completely devoid of technical specifics as a technique of intimidation. I will not remain silent and instead will increase my efforts to hold the SFWMD to a reasonable scientific standard in their public statements. ... As one of the most powerful public agencies in Florida, the publicly-funded resources of the agency are better applied to educating the public on the pressing water issues facing the state."

That's what kills me. The last sentence.

The Everglades Foundation wants SFWMD -- besieged by baloney day after day -- whose mission is "to protect South Florida's water resources by balancing and improving flood control, water supply, water quality and natural systems," to shut up, keep its collective head down and ignore the steady stream of misinformation.

Why would they do that? It would be unconscionable to do that. Bad information repeated often enough becomes accepted truth. Please. SFWMD is the lead agency of many charged with seeing through the completion of the Central Everglades Restoration Plan, the costliest and most complex environmental restoration project ever attempted.

It seems to me the District is indeed pursuing its mission. See an example of its effort to put the brakes on B.S. in the chart reproduced at the bottom of this commentary. The Foundation didn't like this chart either.

It took only minutes after the release of Van Lent's letter for the District to issue what was a mercifully short and, frankly, understated response:

"The scientists and engineers of the South Florida Water Management District welcomed Dr. Tom Van Lent's letter clarifying that his modeling and published article about Everglades Agricultural Area (EAA) storage were, in fact, merely an academic exercise which does not account for numerous real world challenges or obligations. Enthusiastic advocates should be cautioned about repeating the piece's conclusion that an EAA reservoir would reduce the volume of harmful discharges from Lake Okeechobee to the estuaries by nearly 50 percent, while northern storage reduces the volume of discharges by only 6 percent. It is sufficient to say that Dr. Van Lent's "one solution" modeling is based on undisclosed assumptions and incomplete science.

"For an independent, objective look at the science behind storage around Lake Okeechobee," the statement reads, "please see the University of Florida Water Institute's Dr. Wendy Graham's Jan. 11, 2017 testimony before the Senate Appropriations Subcommittee on the Environment and Natural Resources and the Independent Technical Review by the University of Florida Water Institute."

It's good advice. Have a look at Graham's testimony here. You will find her quickly. She is the first presenter in a two-hour meeting.

One of my New Year's resolutions was to lay off Charlie Crist. Give the guy a break, Nancy, he's a new congressman, a freshman in the minority party, given a particularly small office after coming in 50th in the office-draw pool. I promised myself I'd try hard to be nice in 2017.

Alas. Barely a week had passed before I got an email from Michael Hepburn, one of Charlie's Pinellas County constituents, who received a begging letter from "Charlie Crist for Congress." It included the swell photo of the man himself with wife Carole at his swearing-in ceremony. 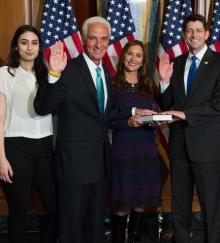 "Michael, will you chip in $10 to help us get our reelection campaign off to a strong start?" asks Charlie.

Hepburn didn't take long. He shot back, "This is some serious bull! It hasn't even been 10 days and you are already asking for money and talking about re-election.

"What have you done to even think that someone should be supporting your re-election campaign when you haven't even accomplished anything in your first term that JUST STARTED!

"I am highly disappointed in this and just in case, if you did not know -- you are doing the exact thing that many people thought they were getting away from.

No, not quite like all the other politicians. I don't know about you, but no congressman from Florida I can recall ever missed his/her first vote on the House floor. Charlie did.

Anyone who wants to know why

Permalink Submitted by C Breeze on January 14, 2017 - 1:07pm
Anyone who wants to know why "Charlie the Tuna" ALREADY is asking for "10 Bucks" for his re=election...should read "EXTORTION" by Peter Scweitzer (He explains the insideous 'system' of "slush funds" demanded of Congressional Representatives by their Leadership...to fund re-election campaigns of Representatives who are useless and "not worth the powder to blow them to hell" (to quote an old Civil War adage). Sounds just like "Charlie the 'T' " begging, doesn't it?!? Well, "Not this time either Charlie"...!

Thank you for sharing and

Permalink Submitted by T Williams on January 14, 2017 - 10:19am
Thank you for sharing and politely calling out the hypocrisy and hegemony. These groups have forced policy and projects forward according to their plan and not always science based reality in the past. Dr. Wendy Graham is the true expert working for a real solution and not a "win" for just one political/environmental special interest group.

Yes, I agree with Wendy

Permalink Submitted by Mike Conner on January 14, 2017 - 2:05pm
Yes, I agree with Wendy Graham. And she says we need MASSIVE ADDITIONAL STORAGE, including in the EAA.

You overlook the fact that

Permalink Submitted by Michael Waldon on January 14, 2017 - 10:13am
You overlook the fact that when big rain storms happen on the Lake the northern reservoirs are useless. Southern reservoirs permit diversion of the resulting Lake outflow to storage then treatment.

Ridiculous - if you store the

Permalink Submitted by Dr. Debunker on January 19, 2017 - 2:16pm
Ridiculous - if you store the water before it reaches Lake O, then you can keep it lower during the rainy season. Just use your brain.

I think just the comparative

Permalink Submitted by Robert Warner on January 14, 2017 - 8:25am
I think just the comparative chart at the end would give your article more credibility - and saved the rest of us from the diatribe.