It seems odd to find heroes in the middle of a crisis that has no immediate solution. Heroes are supposed to sweep in and save the day -- and I don't believe anybody is going to be able to quick-fix the punishing fresh water releases from Lake Okeechobee.

But I'd like to say a word for the dogged determination of state Rep. Gayle Harrell, R-Stuart. For a very long time, Harrell has done as much as anyone I know to get the attention of politicians and bureaucrats above or beyond her station to address the plight of the St. Lucie estuary. I believe she's moving the needle. In my book, she's a hero.

In a legislative delegation where Sen. Joe Negron, R-Stuart is king of the hill, it's easy to overlook the war Harrell fights behind the scenes.

Some in the House have told me there would have been no Legacy Florida had Harrell not persevered at the outset.

Legacy Florida, which the Legislature passed and the governor signed during the 2016 session, provides a dedicated funding source for the restoration of the Everglades and ending the releases from Lake Okeechobee. It flew through the process seamlessly, or so you might have thought. But it didn't happen all by itself. It followed literally dozens of meetings, many of which Harrell initiated, and many dozens of phone calls, emails, texts -- whatever it took to make sure the bill was right.

Unless you hibernated last winter, you'll know Legacy Florida was and is a very big deal. 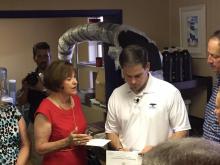 Because of Legacy Florida, the Legislature will be required to appropriate a minimum 25 percent, or $200 million, for Everglades projects that implement the Comprehensive Everglades Restoration Plan (CERP), including the Central Everglades Planning Project, the Long-Term Plan and the Northern Everglades and Estuaries Protection Program. Important to note: Priority must be given to projects that will end the harmful release of water from Lake Okeechobee into the estuaries.

Throughout the legislative process, Harrell was too often left out of the limelight. Negron is the rising Senate president; it was his celebrity the cameras followed, and that's understandable. True, it doesn't matter who gets credit for a good and important bill as long as it passes -- and Negron and Harrell both live at Ground Zero for the algae crisis -- it still strikes me now as a little unfair that I've largely glided over Harrell's contribution without so much as a mention.

When Sens. Bill Nelson and Marco Rubio toured the miles upon miles of fetid algae blooms along shorelines in Martin and St. Lucie counties (though weather cut Nelson's tour short) Harrell spoke with each of them individually, stressing, "We need our federal partners to do their fair share of the 50-50 agreement for Everglades restoration."

She put in both senators' hands a copy of the letter she wrote to the U.S. Army Corps of Engineers -- signed by herself and Rep. Matt Caldwell, R-North Fort Myers, and state Sens. Lizbeth Benacquisto, R-Fort Myers, and Negron, urging the Corps to stop the releases. (See the letter in the attachment below.)

"We need a break --  two to three weeks to let the salt water back in to flush the algae out," she said.

Harrell emphasized to Nelson and Rubio -- and to the Corps -- that "one of the most impactful ways to bring immediately relief to our communities is to revisit the current Lake Okeechobee Regulation Schedule (LORS)."

Are engineers sure the lake can't hold another inch of water?

"Since it was last changed in 2008," Harrel said, "the people living in the immediate vicinity of Lake Okeechobee have benefited from tens of millions of dollars in upgrades to strengthen the integrity of the Herbert Hoover Dike. Such enhancements should allow for Lake Okeechobee to store more water during wet periods and that could help to reduce the need for discharges to occur."

All I'm saying is, Harrell is everywhere, whispering to anyone who needs to be concerned about lake discharges, the ruination of the rivers and the crippling impact algae blooms and a forbidding estuary have on the economy of the Treasure Coast.

Next time you see her, I'll bet it will be in connection with something she's doing to instruct on algae or push for attention on the issue. I'm telling you, Harrell is into it, even when she's out of sight. Legacy Florida aside, I truly believe she's having a positive effect on politicians and bureaucrats who don't want to focus.

The picture you used in this

Permalink Submitted by DJS on July 6, 2016 - 8:33am
The picture you used in this article is interesting. The same day Gayle Harrell appeared with Marco Rubio at the river, Ms Harrell could be seen creeping up behind Marco Rubio in order to smile for the camera and be in-frame with our Senator. SMILING with toxic waste in the background? Gayle Harrell is a do-nothing, ribbon cutting, sugar shrew! As a staunch Republican, I assure you she will not get my vote this year as that will go to Crystal Lucas and any other politician who actually supports buying the land and will do EVERYTHING IN THEIR POWER to make a difference on that one issue alone.

She's right about the Feds

Permalink Submitted by jeffk on July 5, 2016 - 9:20pm
She's right about the Feds not doing their share. What is the root cause of the algae blooms? Is it not the increased stormwater runoff from Orlando sprawl, flushed thru the estuaries and taking septic tank leaks with it? Sugar and water farms are doing their part and should continue. But the fact no algae shows up until it passes septic tank suburbs proves it's caused by the PEOPLE of Orlando and the coasts, not "Big Ag" or Gov. Scott. Science is what we need, not electioneering.

Rep Harrell has shown her

Permalink Submitted by ser on July 5, 2016 - 6:23pm
Rep Harrell has shown her leadership in securing Legacy Fl.-a dedicated source of $$$ for the Everglades restoration but the enviros are still not happy. What will it take/ She is the wife of a doctor and is an expert on healthcare and has also been a champion of immigration reform. Jupiter is a victim of the ElSol program providing all sorts of benefits for illegals-paid for by we the taxpayers of PB Cty. Rep Harrell truly is a hero. doing everything she can as a dedicated public SERVANT!!

Nancy is getting worried..

Permalink Submitted by Jackie Trancynger on July 5, 2016 - 1:19pm
Nancy is getting worried...Gayle Harrell has an intelligent, knowledgeable, River activist, CRYSTAL LUCAS running against her. Crystal deserves your vote in November. Harrell has been in and out of office in Martin County and has never contributed to the solution of our Water/River problems. When the river issue first came up in 2013, Ms. Harrell had very little knowledge, was accepting sugar contributions, did not work hard for Amendment 1 to pass...Legacy Florida will throw money at projects, that even if completed , will NOT SOLVE ALL OF OUR PROBLEMS..We need to buy the land and send the water SOUTH. Please vote for Crystal Lucas and retire Ms. Harrell...do NOT return people to office in Martin County and Florida and Washington, who have no record of helping us to BUY THE LAND and send the water South. Nancy Smith , you are an unwelcome buttinsky, carpetbagger, and rumor monger whose agenda always seems to be in tune with US Sugar and Florida Crystals propaganda.

You have to love thespin on

Permalink Submitted by Sarrah on July 5, 2016 - 6:59am
You have to love thespin on the story by Nancy to protect big surger and the Fanjuls.

Yet you don't bother to

Permalink Submitted by jerry on July 5, 2016 - 6:38am
Yet you don't bother to mention Nancy that is those YOU helped get elected that has caused this problem. Why? In fact in most of your articles you rarely mention anything they do wrongcand even the few times like now you won't name them will you? The fiscal conservative, not republican because they are not but corporatist instead, is to just make the farmers, ranchers keep their pollution on their properties, no? And use sewage tech like composting , other toilet tech of which there is a lot , etc to solve that toreplace septic tanks cheaply. Next you'll find out dogs are a big problem. So are you going to back , push these common sense fiscally conservative solutions and name those backing big sugar, ag?