Lots of people know. But then again, nobody does in the wider world beyond friends and a few offices in the state Capitol. Allow me to be the first to make it official:

Rep. Katie Edwards is engaged to be married.

The man in her life, South Florida agri-businessman Brad Walpole, is about as far removed from public life as Katie is in the thick of it.

"Brad is a very private, nonpolitical person," said Katie, who is also an attorney with a busy practice.

The Plantation Democrat -- fashionably understated, a little like the way celebrities announce such things -- just quietly turned up in Tallahassee this session with a rock on her engagement finger.

The couple plan a fall wedding in Davie.

One of Florida conservatives' loftiest ideologies these days is, "It's not our job to pick winners and losers." We throw that one around a lot.

Unfortunately, when it comes to medical marijuana, it sounds less like an ideology than it does a pontification.

I don't know whether to call it hypocrisy or irony, but when they profess to let the free market prevail, why do some Republican legislators and Gov. Rick Scott say in so many words, "Well, we really mean everything but medical marijuana"? (See the story here.)

Medical marijuana isn't like health care, it's a real market where consumers really do have the ability -- if not yet the permission -- to choose. Yet House Bill 1397, sponsored by Rep. Ray Rodrigues, R-Estero, would limit medical marijuana to seven growers and ban the edible and smokable version of the product unless a patient is diagnosed on his deathbed.

I think we've got the poster scenario here for picked winners. 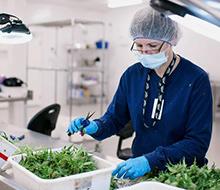 Would the Legislature limit hamburgers to seven restaurant chains? Would it limit beer to seven breweries? This is a Republican Legislature that largely wants to give any county with a pari-mutuel facility the ability to become home to a gambling parlor if residents vote for it. So, permissive with gambling expansion, restrictive with medical marijuana.

Senate Bill 406 from Sen. Rob Bradley, R-Fleming Island, isn't much better. It allows up to 20 more medical marijuana producers, but only if the number of patients registered for treatment reaches 500,000.

On the other hand, Sen. Jeff Brandes, R-St. Petersburg, puts his money where his "I don't pick winners and losers" mouth is. Brandes filed the Florida Medical Marijuana Act. It would open Florida for increased business opportunities in the medical marijuana industry and create a regulatory framework for new entrepreneurs to launch dispensaries.

But as far as I can see, leaders of neither chamber like Senate Bill 614, the true free-market medical marijuana legislation.

Remember, some 72 percent of Floridians -- all kinds of Floridians, all parties -- voted to legalize medical marijuana in 2016.

As a party, if we're going to waffle on our principles, then maybe we shouldn't profess to believe in them at all and admit sometimes we use "picking winners and losers" as an excuse to oppose what we fear or don't want around us.

The U.S. Sugar Twist-a-roo: Environmentalists Are Their Own Worst Enemies

Permalink Submitted by Bill Buckley on March 20, 2017 - 5:48pm
You are correct Nancy.....the whole MM thing smells bad. Don't forget that all 7 companies that currently have a license DID NOT apply for a license to sell full-blown medical marijuana---they applied to sell Low THC mm (Charlotte's Web). Most of the truly qualified companies chose not to apply because the market for low THC is so small. Not only have the 7 companies with licenses now been granted licenses to sell full-blown mm---without demonstrating any ability to engage in such a business---there is also NO LIMIT to the number of retail establishment each of them can operate. Most states limit the number of dispensaries per license (usually 1-3 per license). Why are some trying so hard to give a monopoly to these 7 companies? Follow the money...

Permalink Submitted by Anonymous on March 17, 2017 - 3:45pm
Just pass recreational marijuana and quit playing games with the citizens of Florida.

Remember, some 72 percent of

Permalink Submitted by Bill on March 17, 2017 - 9:22am
Remember, some 72 percent of Floridians -- all kinds of Floridians, all parties -- voted to legalize medical marijuana in 2016. I wish Sen. Jeff Brandes, R-St. Petersburg was in my county, I would vote for him.