You know how I feel about hypocrites. Thanks to Jose Lambiet, I can now introduce you to one of the most prominent ones.

I'm sorry to say it, but when they go low, she may go even lower.

That's right. The same First Lady whose powerful and emotional speech came down like a sledgehammer on Donald Trump’s vulgar comments about women and sexual assault last week in Manchester, N.H. is happy to invite even worse nasty talk to the White House.

Jose Lambiet, my favorite Florida journalist who, by the way, has a habit of scooping every reporter on the planet, did it again Sunday, writing a commentary in Gossip Extra, South Florida's online tabloid, that simply pointed out a disturbing fact:

"In the last seven years, Michelle and President Barack Obama have hosted "some of the crudest, foulest-mouthed rappers out there, thus legitimizing money- and fame-hungry cultural influencers whose demeaning lyrics urge a generation of young men to grope and objectify women."

Please understand that I have great respect for the work the First Lady has done/continues to do to empower women particularly in minority communities here and in oppressive cultures the world over. That's why I don't understand why she doesn't do a closer analysis of the White House guest list -- or, if she does, why she chums up with some of the music profession's most offensive  mysogynists and allows them access to her family. 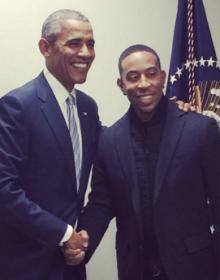 (I hope you will forgive my use of some of the offensive language these rappers have "popularized" in today's music culture. Repeating it is the only way I can make the point.)

Now, I happen to agree that Trump's tacit approval of degrading women is disgusting by any standard, and entirely unacceptable in a president of the United States. I frankly believe he should seek professional help. But I have to wonder why the president and First Lady think it's OK to invite these foul-mouthed, women-demeaniners into the White House, of all places, to stand as role models and examples of success for our young people.

Or, do I mistake what an invitation to the White House means?

In misogynistic rap songs, violence is depicted as the most appropriate punishment for women who challenge male domination or who simply "offend" men, according to "Misogyny in Hip-Hop Culture."

By the way, I don't want to pick on just rap or hip-hop, as it's called. Sexism is rampant in other forms of music, too -- punk, metal and indie rock, for example. But since the 1980s, hip-hop artists more than any other have objectified women, demeaned women, and promoted violence and sexual abuse against women. It's a fact, it's a problem and it is being studied and otherwise addressed in universities and think tanks across the nation.

Either the First Lady is unaware and hasn't made the connection -- which I doubt -- or she's another hypocrite who delivers emotional sound bytes to make political hay.

“I can’t stop thinking about this," Michelle Obama said in New Hampshire of Trump's 2005 remarks. "It has shaken me to my core in a way that I couldn’t have predicted. The shameful comments about our bodies, the disrespect of our ambitions and intellect ..."

Thanks for the story, Jose. It was a sad but important reminder that Trump's "locker room talk" (wink, wink) is more prevalent, perhaps closer to home, than even the president and First Lady of the United States want to see. While it's true, Ludicris, Kendrick Lamar and Jay Z aren't trying to become the next president, they sure are favored with the company of the current one, his wife and, I'm told, his family.

Foul mouth rappers in the

Michelle has done such a

Permalink Submitted by Repubtallygirl on October 17, 2016 - 12:55pm
Michelle has done such a wonderful job with raising her girls around these rap "artists" that they first chance that the oldest recently went to a concert where she lifted her skirt up to show everyone her rear end and tweak. Oh, and got caught smoking pot. Be proud Michelle. "Methinks the lady doth protest too much".

Michelle Obama is a Do as I

Permalink Submitted by Joanne Walczak on October 17, 2016 - 11:13am
Michelle Obama is a Do as I say not as I Do.They will do anything,say anything to further the cause of Hillary Clinton. If that means,it's ok we invite filthy mouthed rappers to the official residence,though Mr.Trump who is running for President's seat says off color remarks 11 years ago and he must be put into a pillory for using free speech among people who he thought were friends. BTW Michelle Boko Haram let" YOUR GIRLS" go so invite them to the residence before 1/20/2017 because you care so MUCH!!

Is it true that Michelle

Permalink Submitted by sharilee on October 17, 2016 - 12:29pm
Is it true that Michelle Obama is a transvestite? I read this weekend that she was born a man. If this is true, it would certainly explain why her husband is allowing transvestites all over the country to invade the bathroom OF THEIR CHOICE. It is mind boggling...

good luck with that argument,

Permalink Submitted by balance of power on October 17, 2016 - 9:27am
good luck with that argument, you have to admire your loyalty though, to go down with the sinking ship... They are all slugs, but try to find the least despicable slug...classic.

C Breeze right on. Maybe the

Permalink Submitted by The Trapper on October 17, 2016 - 9:02am
C Breeze right on. Maybe the presidents daughters start banging one of these nice boys. Donald shot his mouth off 11 years ago in bullshit boy talk. So do millions of other guys. Cept the queeers, and they prolly have their own nasty bullshit talk. Trump certainly did not know it was being recorded for Gods Sake. The Negro rappers are revolting and disgusting. So where do all the poor Negro children get the money to spend so JZ can have $520 million? From the gumment? Selling crack? Meanwhile, back at the ranch - Podesta laments that a Muslim killed the people in San Bernadino. "I wish it had been a white guy". And the GOP HQ in Orange County NC bombed. Orange County is Chapel Hill, home of UNC. And all the wacko left wing professors you would expect. Democrats there 5-1. Probably a school assignment. The Obamas don't even pretend to LIKE America. Go Trump

Hypocrites? How about someone

Permalink Submitted by Anonymous on October 17, 2016 - 7:57am
Hypocrites? How about someone who supposedly believes in democracy, etc but supports and esposes the pa keep a minority in power. Look in the mirror if you want to see a hypocrite. To cbreeze-you're a racist, a bigot and a moron (definition of a KKK conservative.)

Those are musical artist, so

Permalink Submitted by jay dee on October 17, 2016 - 7:41am
Those are musical artist, so in your opinion the Prez just brought bad art into the house.

No. Rap the genre is art. The

Permalink Submitted by FSUprof on October 17, 2016 - 11:57am
No. Rap the genre is art. The content is pure misogyny. The artists choose the content. Therefore this author is correct. I am a fan of the Obamas but in this instance they are hypocritical and sustaining the very image of women they are trying to change. They probably haven't given it much thought.

I have absolutely, positively

Permalink Submitted by C Breeze on October 17, 2016 - 7:37am
I have absolutely, positively NO respect for the Obama's; NONE, NADA!!!!!!!....They have degraded and debilitated the United States of America with their racist and socialist demeanor; they have degraded the "Peoples' House" (as in White) as no other President has done in this country's history. I have been (since the Clinton, Carter, Obama Presidencies) ashamed to be a Democrat; Hillary in the "White House" would be what I call "the clincher",...the "end" of our Republic (which may not even be standing when she gets done). Why are "politicians" hated, despised, demeaned and distrusted?!?...it's because of the above described 'maggots' who have 'wormed' their way into our political system. I, as just ONE Democrat, refuse to support (IN ANY MANNER) ANY duplicitous, lying politician who 'talks down' to America's Citizens in a sanctifying and pontificating manner; Hillary was unfit to have ever been "First Lady", unfit to be Secretary of State, and CERTAINLY unfit to be President of the United States ! It's TRUMP/PENCE for me, THIS TIME !!!!!!!

Another pathological lie by C

Is that all you have Nancy?

Permalink Submitted by jerry on October 17, 2016 - 6:44am
Is that all you have Nancy? That's pretty weak............. Of course you have little to say about the biggest lair of all, Trump.......... Why Nancy?................ And you other Trump's chumps, the economy sucks because they in 2000-2008 they took a $250B surplus and turnec it into a $1.1T deicit and losing 800k jobs a month. .......... Now read that again until you undetstand it ................. This proved republican economics, tax, regulations, energy, war policies are fiscally and morally bankrupt. .......... Rwad that agsin.........Since then republican controlled Congress had self inflected wounds trying to shut down the government, not pay the debts they ran up, not passed real budgets, just continuing the old one mostly , not bringihg up and passing tax reform, etc.......... If you want to know why the economy isn't as good as it should be, why are you voting republican as they are the cause because they couldn't stand the fact the economy was doing so well coming back trom what could have been a real depression, by a black man, dem, proving their policies are fiscally and morally bankrupt...... The answer isn't the most vile politician since McCarthy , in some ways worse as tahgt by McCartney's lawyer to be a raving azz hole and morally deprived. .......... Like the Trump Chump below trying to make excuses when Trump himseelf said 2 times at least on tape that is what be likes to do, assult women.......Fact is he is conning you doing everythijg he can think of to losebthe electipn so he can make a new network like of hate, fear for gullible fools like you..... You should be so proud as if elected would make 2008 look fun economically.

There is so may things that

Permalink Submitted by SoFineSoFla on October 22, 2016 - 7:49pm
There is so may things that are just campaign rhetoric within your little rant there so I'll just leave you with an undeniable fact: 19 trillion dollars of federal debt. Basically Obama didn"t fix anything or even attempt to, he just threw printed money at it. Some Hero!

Permalink Submitted by Robert Warner on October 17, 2016 - 6:35am
Nancy Smith, "...blah, blah, blah..." Odd that so much time and energy is now being put in burning down the family house. I think we should be looking at giving credit where credit is due and saving this Republic, not igniting the apocalypse. Hom's and 18 USC 115 are becoming reference points.

The allegations against Trump

Permalink Submitted by Lynn Anderson on October 17, 2016 - 6:18am
The allegations against Trump (and many are not being proved totally FALSE) are just that, allegations. They can not be proved other than a tape that came out using "dirty" words. People are innocent in this country until proven guilty in a court. So, for you all to continue reporting in this manner is totally irresponsible especially for a reporter.

Thanks Nancy for pointing out

Permalink Submitted by Barney Bishop III on October 17, 2016 - 6:17am
Thanks Nancy for pointing out the hypocrisy of the Obama's...at least they're consistent in their bad taste by inviting rappers to the White House to degrade EVERYONE including women...that's why the POTUS and FLOTUS have no high ground to complain about anyone!