Landmark Justice Reform Package on Its Way to the Governor

With the House vote Friday, the Florida Legislature has passed its most expansive justice reform bill in 20 years, an initiative led by the state's crime surivors, many of whom rallied in Tallahassee this session to call for change.

Robert Rooks, vice president of the Alliance for Safety and Justice, said of HB 7125,  what makes the legislation so "exciting" is that "major provisions of the package were championed by Florida crime survivors from across the state in their #SurvivorsSpeak Justice Reform Agenda.”

Thousands of Floridians are incarcerated, not because they have committed a new offense, but because of a technical violation of probation (missing a class or meeting, not reporting a change in employment, or change in address), said Rooks. This legislation would encourage a more effective approach proven to better hold people accountable and ensure they successfully re-enter society: judges using graduated sanctions rather than expensive prison time for a technical violation of probation. 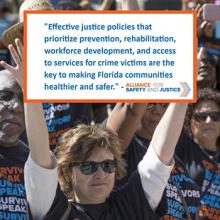 Credit: Alliance for Safety and Justice
Florida's 2019 legislative package contains changes which crime victims have said stop cycles of crime and make communities safer. These include improving the probation system by expanding the use of non-prison responses to violations of probation rules, reducing barriers to work for Floridians with a past conviction, and removing barriers for crime victims to access victim compensation.

Debbie Ortiz, a Crime Survivors for Safety and Justice member from Spring Hill, said, “This year, over 300 crime survivors from across the Sunshine State traveled to Florida’s Capitol to advocate for policy changes and worked with lawmakers all session. This is the first time criminal justice reforms, which both reduce incarceration and improve safety, were advanced in partnership with crime victims, representing a turning tide.”

At least 47 other states have a higher threshold for felony theft, higher than Florida’s $300 amount, including Alabama, Georgia, Mississippi and South Carolina. Florida’s threshold hasn’t changed since 1986 and fails to reflect current costs and dollar values. This legislation would modernize Florida’s threshold, ensuring people are held accountable without the excessive use of felony convictions, which carries destabilizing barriers. The new threshold would be increased to $750.

Through changes targeting how the state responds to low-level violations of probation rules, low-level property crimes, and numerous other provisions, HB 7125 will result in hundreds, if not thousands, fewer people sitting in Florida’s overburdened prison system for these low-level, non-violent crimes and rule violations.

And, stats from the Alliance for Safety and Justice show Floridians living with a past conviction face over 500 legal restrictions that prevent them from contributing to their families, communities and the economy. A past conviction can restrict people from receiving state-issued occupational licenses, blocking them from employment that could help them achieve self-sufficiency and successfully re-enter society. A number of jobs require such licenses, including fields like barbering, cosmetology and construction, among many others. This legislation moves Florida closer to a system where a past conviction can no longer prevent Floridians from earning a job and achieving economic stability.

By providing pathways to earn redemption, we ensure people become contributing members of their families and communities rather than remaining in a cycle of crime. Removing obstacles for people to work can reduce recidivism and create safer communities.

Crime survivors face serious barriers to getting help after becoming a victim of crime -- many get no help at all. This legislation changes all that.

The Alliance for Safety and Justice, whose Florida members provided the impetus for HB 7125, is a national organization that aims to win new safety priorities in states across the country.

long overdue, you get tired

Permalink Submitted by The Truth on May 3, 2019 - 11:23am
long overdue, you get tired of the stupid saying, we don't want to have to do this, but the law requires it. It is long overdue to ensure not only the laws, but the consequences make sense... There should be consequences for crime, but once you pay your penance, you should have the opportunity to return as a productive citizen.

I guess being a convicted

Permalink Submitted by Bocaboomer on May 3, 2019 - 10:28am
I guess being a convicted felon no longer merits any real world consequences for committing the underlying offense. Talk about disparate levels of punishment for a felony across different States is an affront to legislatures and State Sovereignty in an attempt to dumb down chargeable offenses. Isn't that the precise tactic used by School district to mask the number of felony offenses in Broward County? And now parents are outraged about that practice of under reporting crime to reveal just how risky their children's safety is. Consider the unintended consequences..