Stop The World, Nikki Barnes and I Were At Rick Baker's Watch Party

Excuse me for a minute, while I laugh. Actually, I don't know whether to laugh or call the police.

There are some serious stalkers in Florida.

I get that he is a bit pissed that elected officials call me now before they call him.

Particularly in his own backyard of St. Petersburg.

Perhaps Rick Baker didn't invite big Pete to his watch party. (not sure if there would have been enough food).

Whatever the case, big Pete has his panties in a wad because I attended Baker's watch party, along with Nikki Barnes, who happens to be a DNC member. (See Schorsch's story here.)

He reported this "news" like it was some scoop, and he was outing us.

I guess it didn't matter that I posted pictures of myself and Nikki with Baker (see the photo below), and Democrats Wengay Newton and Goliath Davis, on our respective Facebook pages and on Twitter.

Peter Schorsch is so triggered that his blog is no longer the only game in town that it is causing him not to eat.

Well, he isn't that triggered yet, as you can tell, but he becomes a psycho when it comes to me.

Back to the stalking.

He doesn't get it that he is a non-factor with me. I don't need "Florida Politics". The people call me before they call him, and that is what bugs him.

As for Big Pete and Kriseman's surprise win last night, go through he of extra large girth's articles and you'll be hard-pressed to find one calling that win before it happened, but I guess all that fat around his brain is causing amnesia.

Until the big one tags me on Twitter, or writes these "gotcha" stories about who I'm associating with or what my political affiliation is supposed to be, I forget that he even exists.

That pretty much applies to the whole gang of trolls who are now pressed about Rick Baker's watch party.

I'm told that one blocked troll was begging someone to re-post my tweets just so he could see them.

Seriously? These people are that obsessed with me? People I couldn't care less about?

It has now progressed beyond white folks thinking they own the black vote.

Some now think it's slavery days again and they own black bodies.

You can't dictate who can and can't attend a party, no matter how much you think you can.

Every single person crying about Nikki Barnes attending a party was white.

Newsflash: you don't own her person. I've already made it clear that no one owns mine.

Make no mistake about it, if I choose to attend another watch party of Rick Baker's, or anyone else's, I will -- without a single thought of getting anyone's permission.

Leslie Wimes, a Sunshine State News columnist, is founder and president of Women on the Move and the Democratic African American Women Caucus, www.daawc.com. Follow Leslie on Twitter: @womenonthemove1 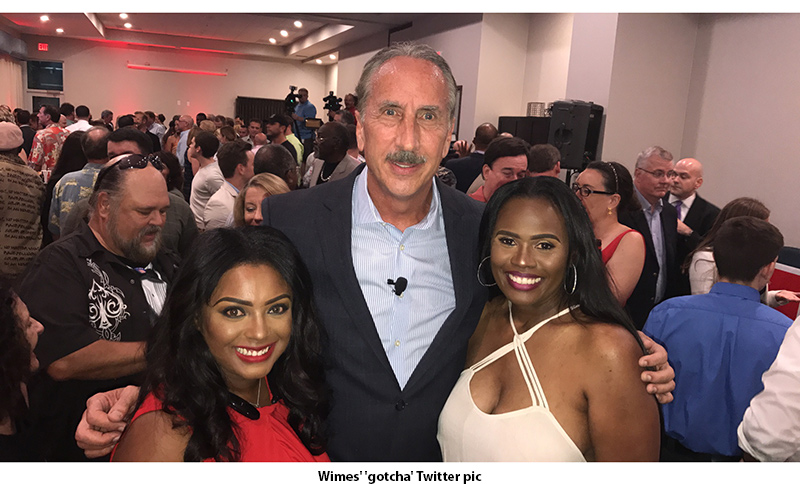 Fat shaming someone while

Permalink Submitted by Angie on September 4, 2017 - 6:02pm
Fat shaming someone while making your point makes you look petty, high schoolish and mean spirited. Your valid point didn't need that to stand on its on. This isn't a black/white issue or a I am more popualar than you are fatty issue. Its a perception issue of the loyalty oath. I am seeing Ms. Wimes more and more as a bully and a taunt. This will be our ongoing problems as we have independents trying to turn the Dem Party into the Bernie perspective. Journalism is being watered down and less respected because of this type of writing.

Permalink Submitted by Andrew Nappi on September 1, 2017 - 8:52am
I am an old, fat, Jeffersonian. I enjoy Ms. Wimes' columns immensely. On more than a few occasions she speaks truth to power. Agree or disagree with her, one would do well to read her blunt and oftentimes humorous insights. It's not uncommon for journalists to have feuds or enmity to the point of eviscerating each other. I personally find nothing to like in the democrat party plank but I enjoy the heck out Leslie Wimes' columns.

I'm not sure how this came

Permalink Submitted by Patti Bridges on August 31, 2017 - 1:41pm
I'm not sure how this came into my timeline. I read it but I've never heard of this blog or the blogger. I've never met her or her friend. There must be some mistake. Pleas take me off your posts.

My Sistah’ you got it crooked

Permalink Submitted by Elizabeth Judd on August 31, 2017 - 10:56am
My Sistah’ you got it crooked... Democrat leaders do not style and profile with the opposition. Think about it have you ever seen Congresswomen Fredericka Wilson or Sheila Jackson Lee being embraced by any republican male. Just saying! If you want to become higher elected democrat elected official you need to stop and think about the nonverbal message you are conveying. Also your dress code is extremely revealing reminds me of first lady Trumps naked pics. Ladies with dignity don’t publicly bare all.

No Elizabeth, your wig is

Permalink Submitted by Anonymous on August 31, 2017 - 3:41pm
No Elizabeth, your wig is crooked. And dry. Water that thing occasionally. Especially before you try to come for these two ladies. I'm glad I didn't vote for your old butt now! Stop cooning!

Permalink Submitted by Alwaysandforever on August 31, 2017 - 9:22am
This post is incredibly crass and tasteless. I don't need know you or "big Pete", but it seems like you're okay continually fat shaming him and making juvenile jabs at his weight and food. You seem like a sad person who craves attention. I seriously hope the DNC revokes your membership.

I am crying and I am not

No one cares who attended the

Permalink Submitted by what? on August 30, 2017 - 3:25pm
No one cares who attended the losing party...baahaahaaa

Wow! Don't for ONE SECOND do

Permalink Submitted by Bill on August 30, 2017 - 1:05pm
Wow! Don't for ONE SECOND do anything that might even remotely be perceived as disloyal to the Party. Congrats, Ms. Wimes, for exercising your freedom of choice and standing up to wannabe bullies.

While I agree with Wimes that

Permalink Submitted by Daniel on August 30, 2017 - 11:53am
While I agree with Wimes that the Democrat Party has many leaders and candidates attempting to control the hell out of everyone, and treating blacks like plantation slaves (like Hillary on hot mic calling blacks the "N" word on Couric's interview), but it still seems that a reporter for SSN should keep articles about the happenings, with much, much, much less about the writer's personal disgusts (fat people, etc).

Permalink Submitted by Elizabeth Judd on August 31, 2017 - 11:01am
Acting like Black plantation slaves.

how's it feel to be

Permalink Submitted by you are irrelev... on August 30, 2017 - 11:41am
how's it feel to be irrelevant and attending the losing watch party? Nobody is calling you for anything, don't flatter yourself. People were concerned about Nikki Barnes being there because she is hot...you, not so much...

It always amazes me when

Permalink Submitted by Anonymous on August 30, 2017 - 11:53am
It always amazes me when people respond to Leslie's articles with "you are not relevant" and forget that they are responding to HER article. Duh! Stupid much dude? Clearly she relevant or you wouldn't be responding, and sorry, she is HOT. This must be Peter!

I don't normally agree with

Permalink Submitted by Anonymous on August 30, 2017 - 10:28am
I don't normally agree with Wimes, on this one, I have to. In no other race except a nonpartisan one does a person get to focus on issues. Why is it such a problem for black democrats to focus on issues in this race? I am seeing white people having fits over this and it truly is a shame.

While a non- partisan race,

Permalink Submitted by Margaret Joffe on August 30, 2017 - 10:10am
While a non- partisan race, each candidates leanings were well known. I will not debate Bakers tenure with you but if you decide to support a candidate babied by state and national republicans, then you are a republican. I think what we are asking is for you and Nikki to admit it, register and get on with life. This is especially true for Ms. Barnes, who holds a state democratic committee position.

OK I liked it

Permalink Submitted by C Breeze on August 30, 2017 - 9:39am
Good article Leslie; EVERYONE is far more interested in "control" than they are in "competence" (unfortunately, one must 'circulate' in the "political cesspits" to determine true motives and intents...)

go back to NY you fat loser..

Schorsch did the same thing

Permalink Submitted by Anonymous on August 30, 2017 - 9:03am
Schorsch did the same thing to Javier Manjarres. He hates competition. He is pathetic! Gross and pathetic.