Over the last few weeks, protesters against President Donald Trump have been showing up at local Republican rallies in Northeast Florida.

In Jacksonville, the Duval County GOP held a “Spirit of America” rally supporting Trump at the Jacksonville Landing. Two hundred Trump supporters appeared along with a handful of protesters who held up “Impeach Trump” signs.  Talking with Sunshine State News, several of them identified themselves as being fans of former presidential candidate U.S. Sen. Bernie Sanders, I-Vt.

Duval County GOP Chair Karyn Morton says she wasn’t fazed by the protesters. “We expected them to show up, but it didn’t stop our message,” Morton said.

While the Trump protest in Jacksonville was small, just down the road in St. Johns County, traditionally a strong Republican area, their numbers were much larger.

Recently, the St. Johns County GOP held a pro-Trump rally in downtown St. Augustine. While there were around 300 Trump supporters, there were also some 50 protesters.

Indivisible America, the group organizing some of the protests on the First Coast, claims to be non-partisan, but its website hosts a guide to “resist the Trump agenda.”

Some of the protesters told Sunshine State News they hit Trump on a number of fronts, including accusing him of wanting to dismantle Planned Parenthood. They also took shots at Florida Gov. Rick Scott, blaming him for all the environmental problems in Florida.

Trump supporters have been quick to dismiss groups like Indivisible America as “fake protesters” who are being bused in from outside the area to cause problems. But Nell Toensmann, the chairwoman of the St. Johns Democratic Party says that’s not the case. 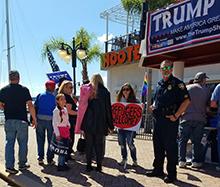 “No one is bused in from another county for any of these meetings or events and none of them are paid to organize these organizations," she told SSN. “They are all doing this voluntarily. Nor is anyone in the local Democratic Party in a paid position.  We are all volunteers.”

Toensmann said all of the protesters were locals residing in St. Johns County and the surrounding area. When asked who organized the protest at the local Trump rallies, Toensmann said the St. Johns Democratic Party did not organize the protest, nor did Indivisible America, but she noted both organizations publicized and  advertised the upcoming Trump meetings.

Korach told SSN a couple of people he knew attended two meetings of Indivisible America and the group planned the protest in advance of the Trump rally.

Korach also says there were around 500 people attending the local Indivisible America meetings.

“In a county that has a heavy Republican turnout, to see this many people turn out to organize a protest begs the question if they are really local or from outside the area,” Korach said.

Earlier this month, U.S. Rep. Ron DeSantis, R-Fla., held town hall forums in his district. On several occasions, he was heckled by members of Indivisible America.

Marti Miller, president of the Republican Club of Greater St. Augustine, and other local Republicans who attended the town hall events told SSN that at times the protesters and supporters were yelling at each other at the meetings.

“Having a peaceful protest is one thing, but these people (Indivisible America) were here to heckle, disrupt and cause problems,” Miller said.

“We have a better message and a better grassroots,” he told Sunshine State News. “If they want to continue to protest, we’re ready.”

"Nell" may not be in the loop

Permalink Submitted by Lanielou on March 17, 2017 - 1:10pm
"Nell" may not be in the loop. Obama's OFA is operating outside the traditional DNC. Obama/Soro's have hired 50k protestors & train them from 250 old campaign offices all over the US. Unfortunately, there's also 28 mercenary led training camps for Anarchists... and they blend in with the OFA protestors. Florida & the GOP needs to keep an eye on this. OFA partner groups are talking violence more frequently. Take a look at a you tube video of the Berkeley riots at the Milo event. The process is huge #'s of OFA protestors surround a group of bldg.'s selected by Obama/Soro's & surround them. Once in place, busses of anarchists arrive, wearing black masks & armed with metal poles.... run thru the OFAers & start destroying property & breaking heads (their term). The protestors become a meat shield, between the arriving cops & the anarchists, feigning injury to slow cops, trying to reach the anarchists. If the cops make progress, an outlook warns the anarchists & they dispurse. In DC, cops are trained for anarchy & rapidly dispersed the OFAers, arrested 200 anarchists & charged them with felonies, carrying up to 10 year in prison. In Berkeley, the mayor made the cops "Stand Down", resulting in mass damage & several injuries. Florida cops need to be trained like the DC cops & FL laws need to be as strict as they are in DC.

I'd say EDUCATION is the

Permalink Submitted by Tampaguy on March 17, 2017 - 8:58am
I'd say EDUCATION is the cause of these protests.... if the Protesters could READ, they would know what a dismal failure communism is, and get the knowledge to make money the "Classic American" way... GET A JOB. these people don't work -- they just PROTEST, collect Government handouts, and watch cartoons.

Funny how a lot of these

Permalink Submitted by Anonymous on March 17, 2017 - 7:06am
Funny how a lot of these protesters are welfare and SSD recipients. If they can protest, carry a sign and march they can get a job and work to make a living. Oops, a job maybe that's why they don't like President Trump.

Permalink Submitted by We Impeach on March 16, 2017 - 8:30pm
The citizen's Trump impeachment strategy. The rules of Congress stipulate citizens can initiate the process. A Missouri citizen used this to impeach a federal judge. Spread the word. https://impeachforpeace.org/cgi-bin/diy.cgi?Trump

Permalink Submitted by John King on March 16, 2017 - 9:54pm
Yes, citizens can initiate the impeachment of a US President, but, in case you are not aware, impeachment, even if successful, does not automatically result in removal of any sitting president from office. I kindly refer you to the monumental waste of time and money that was lavished on the1996 impeachment of one William Jefferson Clinton who knowingly and willingly perjured himself before a Federal Grand Jury in the vain attempt to conceal his serial adultery, sexual coercion/assault and philandering with various and sundry women, to include Miss Monica Lewenski, among others. Clinton's perjury, a third class felony, only resulted in the forfeiture of his license to practice las in Arkansas, not in his removal from office as President. So, in the unlikely event President Trump has committed an impeachable offense in the past 53 days he has been in office, it is highly improbable any impeachment proceedings in the US Senate would result removal from office. So, spend your time as you will, just don't hold you breath. Better yet, hold your breath, turn blue and die for all I care, the world would be just that much better off.

If you listened to the

All these protesters are Anti

Permalink Submitted by Robert on March 16, 2017 - 4:19pm
All these protesters are Anti-American socialists! They don't deserve the freedoms that the Constitution insures we have in America. Our founding fathers never intended for this republic to become a nanny state of socialists and globalists.

The fact that our

Permalink Submitted by John King, Tampa on March 16, 2017 - 8:10pm
The fact that our constitution protects even these misguided geniuses is what makes America great! Thank God we are Americans!

Permalink Submitted by KPE on March 16, 2017 - 2:56pm
Absolutely! I protest liars and hypocrites wherever and whoever they are! Especially if they are our president! You should do the same and stop believe his propaganda about fake anything. He is the "fakest" thing out there!

What protests? All I've seen

Permalink Submitted by John King, Tampa on March 16, 2017 - 9:05pm
What protests? All I've seen so far are a bunch of whining, sour faced cry babies who don't seem to have the first idea as to what the are talking about. Most of whom are so afraid of loosing a few measly crumbs from Obama's table they are willingly giving up their God given rights as free men and women.

Racist to protest Trump you