The U.S. Sugar Twist-a-roo: Environmentalists Are Their Own Worst Enemies

No wonder sugar people are so loathe to speak up in their own defense. This week the twisted tongues of environmentalists showed us why.

Interviewed Monday on Public Radio Station WMFE-Orlando, Judy Sanchez's words were as plain as the nose on your face.

The senior director of corporate communications and public affairs for the sugar giant was asked about Senate Bill 10, Senate President Joe Negron's proposed legislation to locate a 60,000-acre reservoir south of Lake Okeechobee.

Here's what she said: “If the state were to execute that option our name’s on the contract. We’d live up to it."

But here's what WMFE interviewer Amy Green SAID she said: "... Spokeswoman Judy Sanchez says if the Legislature approves the plan, the company would honor a previous agreement authorizing the state to buy 153,000 acres."

No, Amy. Sanchez said "if the state were to execute that option." That's an ocean away from "if the Legislature approves the plan ..."

Check it out for yourself. Open this page and click where it says "Listen."

Sanchez has consistently said U.S. Sugar would not sell unless their back was against the wall, unless the state gave them no other alternative but to revert to a contract drawn up in 2010.

OK, so let's say the public radio station made an honest mistake. Maybe Senate Bill 10 isn't one of their issues.

But you know who didn't make a mistake? You know who deliberately used Amy Green's words to substitute for Judy Sanchez's words? I'll give you one guess.

If your answer is the Everglades Foundation and/or BullSugar.org, go to the head of the class.

These folks dismissed the truth, turned it into propaganda.

“We’re encouraged that the sugar industry remains at the table and be a partner in solving the Everglades and the issues relating to the Everglades because the Everglades is the water supply for 8.2 million Floridians,” said Eric Eikenberg, Everglades Foundation CEO. 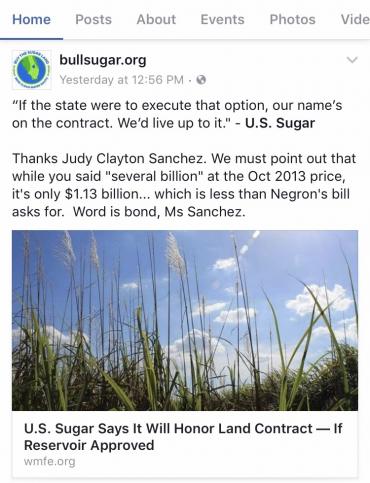 BullSugar tooted out on Facebook (shown on this page): "Thanks Judy Clayton Sanchez. We must point out that while you said 'several billion' at the October 2013 price, it's only $1.13 billion ... which is less than Negron's bill asks for. Word is bond, Ms. Sanchez." Then, in bold under a sugar cane photo, BullSugar writes, "U.S. Sugar Says It Will Honor Land Contract -- If Reservoir Approved" -- Uhh, again, no it doesn't.

As Sanchez said in a statement she gave WMFE to correct their error, "These activists have said many less than brilliant things over the years, but this just may be the dumbest thing they've ever said in their continued attempts to put Florida farmers out of business."

By the way, the station has said it will not use Sanchez's statement, saying they have accurately covered U.S.. Sugar’s position.

Here is her statement in full, written before the BullSugar Facebook posting:

"Erik Eikenberg and the Everglades Foundation are grasping at straws and mischaracterizing what we have consistently stated regarding the future of our land. We are NOT interested in selling our land. We are celebrating our 85th year of farming and providing food for American families and plan to continue doing so.

"The state has a 2010 contract option for 153,000 acres of our land. However, no state or federal agency is proposing to buy our land, and we are not willing sellers. We believe the solution lies in focusing on the suite of scientifically designed, engineered and approved projects specified in the Integrated Delivery Schedule.

"Our position on this has not changed, and in sheer desperation, the Everglades Foundation is trying to twist our words to save their dream of taking our land.

"These activists have said many less than brilliant things over the years, but this just may be the dumbest thing they've ever said in their continued attempts to put Florida farmers out of business."

The public's perception of environmentalists has changed a great deal in the 21st century, and not for the better. Something like this -- deliberately misconstruing a comment in a Big Sugar interview -- is a perfect example of why.

a lot of money and

Permalink Submitted by idiot checker on March 20, 2017 - 9:14am
a lot of money and misinformation that still will not solve the problem...

Amy Green caught in a lie

Permalink Submitted by Ardis on March 16, 2017 - 11:26pm
Amy Green caught in a lie again. You continue to falsify the words from folks you interview. I know first hand. Stop the lies. Tell the truth.

Why are we still entertaining

Permalink Submitted by Elaine Farrell on March 17, 2017 - 12:58pm
Why are we still entertaining the goals of the Globalist NWO Agenda 21/30 Map of the US? The Globalist attempt to take over the world has failed.... After 10 years of trying, all they accomplished is making their Greedy World Bankers & Bored Billionaires into multi-Billionaires & bankrupting most EU nations. Do what's best for Florida... with "Best Use of Land" as a guide.

This only states the obvious.

Permalink Submitted by Jeff on March 16, 2017 - 9:01pm
This only states the obvious. U S Sugar executed a contact in 2010 to allow the state the option to buy their remaining 153,000 acres of land. It is a binding option, but the price is maximum price is not specified and the cost is dependent upon current appraisals. As I recall, the absolute minimum price is $7,400 per acre. And that does not include the value of its sugar mill, refinery and railroad. it is a pipe dream to expect the federal government to pay for any of this. The people of the Glades are tired of the empty promises that their economic needs would be taken care of by Enterprise Florida, which is it itself on the budgetary chopping block. They correctly understand that the losses of good paying jobs under Joe Negron's plan will be permanent.

Permalink Submitted by Bill Stuart on March 16, 2017 - 8:38pm
Nancy, Right on point. Seems President Trump(as many before him) see the need to closely examine the taxpayer funded corporate outfit for public broadcasting. I agree. What was once a respected organization with real qualified journalists has morphed into a "can be bought and paid for" forum for corrupt rich special interest groups. Amy Green's sell out to the moneymongers at the Everglades Foundation shows what thin skin these so called public broadcasting execs have. They try to protect their own hides rather than the intent of Congress when it established public broadcasting. Cut their money off!

Permalink Submitted by Mark on March 16, 2017 - 6:49pm
Every single legislator should read this and "listen" to Judy Clayton Sanchez twist & sweat when speaking publicly! No conditions and certainly never mentioned "IF" the bill is approved, or not. I do hope legislators, at least the ones who can read, read your article so they can see how BIG SUGAR is playing them!

If the bill is approved, what

Permalink Submitted by Carli on March 17, 2017 - 12:55am
If the bill is approved, what? What is Judy supposed to say? She spoke the truth while you spooky coast freaks play political games. Smart legaslators see your kind for the liars you are